Is Your Team on Target? How to use Scrum Burndown Charts to Measure Performance

Scrum Burndown Charts are designed to provide your team with feedback on how you’re performing, so you can make informed decisions as you move forward.  There are different levels of burndowns including project, release, and sprint burndowns, but they all have the same purpose — to give your team feedback against your target plan.

Burn down the number of incomplete PBIs on the sprint

The challenge with burning down the number of incomplete PBIs is that sometimes items vary dramatically in size. If some items can be implemented in 3 days while other items may take 7 or 8 days, this may not give you enough precision in terms of how you’re doing against the plan.

Burn down the estimate of incomplete PBIs

The drawback with burning down the estimate of incomplete PBIs is that some items can only be completed in half a sprint. Your chart will accurately show a horizontal line until day 6, but it’s not very informative in terms of showing whether you’re on target or not. You won’t know until day 6 or day 7 if you’re behind, and at that point, you won’t have a lot of options.

Burn down at the sprint task level

If you’ve identified 100 tasks that you must execute during the sprint, you can burn down the number of incomplete tasks. But take note: your plan isn’t fixed. If on day one, you had 100 tasks and on day two you had 95 tasks, it doesn’t necessarily mean you’ve completed five. You could have completed 10 and identified 5 new tasks.

This chart shows you the number remaining which includes both those to be completed, those removed, and those that you added.  However, if some of the tasks vary dramatically in size (from an hour or two to a couple of days), then burning down the number of tasks may not give you a great enough level of precision.

You may decide to estimate the 100 tasks by the number of  hours it should take to complete them. If the total estimated hours are 500, you’d expect to have no hours remaining at the end of the sprint. There’s a trajectory you’re supposed to take – a flight path your team’s work must take to finish this planned amount of work in this amount of time. This becomes the target.

Why plotting your progress helps you make informed decisions

By plotting your team’s progress on a daily basis, you can clearly see the trend of when you’re going to complete this planned work. If you’re looking at a burndown with the red line as opposed to the burndown with the blue line, it should lead you to make very different decisions. 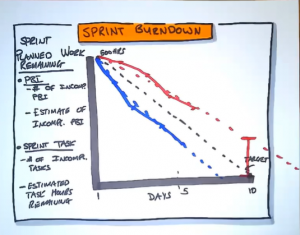 The blue line tells you that you’re ahead of plan and there’s very little risk of not finishing everything you planned. But the red line tells a very different story, because based on your current rate of progress, you’re not going to finish everything you planned. This means you need to be very careful about what you choose to work on, since only the completed tasks become part of the increment.

Take note: the estimated hours remaining is not equal to the original estimate minus time spent – it’s a re-estimation of the time remaining now you’ve started working on it.

Burndown charts are a useful way of tracking progress and helping your team make informed decisions. But a word of caution: burndown charts are only useful if they are placed where everyone can see it and your team looks at it and uses it every day.

Want to join the discussion?
Feel free to contribute!